Saturday morning in the kitchen, Vincent and Chuck were eating breakfast and talking about Vincent’s P-51 Mustang Ride he got the day before. After a while the rest of the house had awoken and made their way into the kitchen. We all figured out what we were going to do for the daily events. It being Saturday, means there is a night show after the daily show. Vincent and Peter were planning on staying for the night show, so they drove over together. Bonnie, Scott and I were planning to meet up with Craig, Gary and Gary in warbird alley. There we were to try to find some re-enactors to pose for the group around warbirds. Larry was going drop Scott and I off in warbird alley and we were going to meet back with him later.

Down in warbird alley, we found Ryan and Steven, two great guys willing to pose for us. After Ryan was all suited up, we made our way over to Eric Hollingsworth’s P-40 Warhawk. It quickly became clear that this was not the first time Ryan, Steven and Gary Daniel has done a photo shoot like this. Ryan and Steven both were great, patient, took suggestions as well as suggested ideas. Gary Daniels too was just as great, he did a wonderful job with Ryan and Steven fine tuning their positions as well as asking the group how we felt. Everybody was very respectful of each other and our surrounding, we played very well with each other. After we felt we had enough of the P-40, we moved on to Jack Larson’s P-51 Sierra Sue II. There we continue the same routine of position, shoot, experiment, reshoot, all the while being mindful of others and we were starting to draw a crowd! For me, that shoot was the most memorable experience during my 2017 trip to Oshkosh.

After that charged shooting session, Gary Daniel, Scott Slingsby and I, slowed down and get a bite to eat. From there Scott and I made our way over the vintage area to see one of the award-winning aircraft. 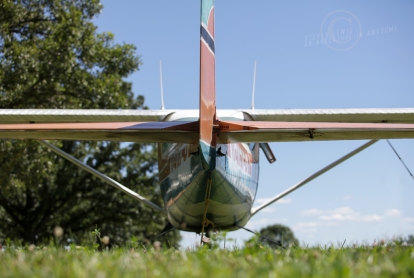 We met up with Larry at the media center, where he got Scott and I a better shooting location in the VIP area. Which was far less crowded than the rest of the show line. 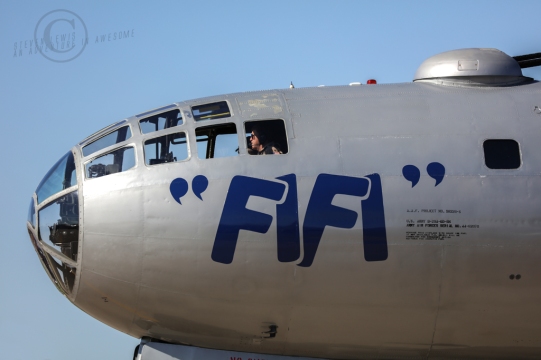 Saturday’s airshow was a special for aviation enthusiasts. We got to see all the iconic WWII bombers we all love. Flying in formations that has not been seen in well over 60 years, with Fifi and Doc, the last two flying B-29s. This was Doc’s first time at Airventure after a meticulous 16-year restoration. Which was followed by a parade of bombers with 2 B-29 Superfortresses, 4 B-25 Mitchells and a B-17s.

Then the USAF brought all 3 of its heavy hitters together in a rare formation. Leading the pack was the sleek B-2. On one side was the aging B-52 soldiering on with over 50 years of service. And on the other, was the B-1. Also known as the Bone (B-one), looks like it feared the B-2 by how far out of the formation he was. But oh well….

Each of the bombers performed various passes. It was refreshing to see the B-2 do a photo pass. Here’s a little fact about the B-52 that performed at AirVenture, B-52 number 61-0007 was brought back into service after sitting in the Bone yard for 7 years.

2017 marks the first time the USN Blue Angels flight demonstrate team perform at AirVenture. I have seen the Blues many time and there are always entertaining as well as very photogenic in the afternoon light at Oshkosh.

The finale of the show was again the USAF Heritage flight. The F-35 lead two P-51 Mustangs on its wings and an A-10 Thunderbolt II in the slot position.

Making our way to the media center, I realized just how many people were here. During the week, the crowd was not so big, which is understandable. But come the weekend, everywhere you looked there was a sea of bodies. With the number of people there and how traffic was going to be after the night show along with there were no jets flying in the night show, we decided to head back to the house. 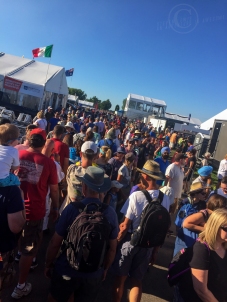 Back at the house, it was time to dump cards, find something to eat and prepare for the morning like we did all week long. But Saturday night was a little different, it was the end of the weekly grind. Most of the members in the house was leaving tomorrow and heading home. Scott packed up, said his goodbyes to everybody and was off to Milwaukee to catch his flight home in the morning. I think everybody went to bed early, but Peter and Vincent stayed for the night show and returned late.

Time to put the House the way we got it. Making beds, cleaning dishes as well as packing up our clothes and gear. We all said our goodbyes and exchanged information. With everybody’s car packed and the house locked up, we took a quick group selfie and we all parted ways. On the drive home, I reflected on my experiences from the past week and begin to process the whole trip. My takeaway from EAA AirVenture is that it’s a photo grind. I mean that in a good way. The repetition of each day but still looking to do things differently from the day before. Trying to contain the feeling of being overwhelmed by enormous amount of aviation stuff and yet stay focused on my task. AirVenture is something I know my photography cannot do if justice. It is something every aviation and photography nerd must experience at least once. 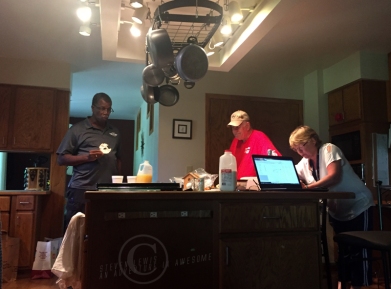