My next show is a little show down in Goshen, Indiana. Back in 2015 I attended their show, Rotors and Ribs, a small one day helicopter event along with a Rib cook off. Unfortunately, it was rained out. But I did like the feeling of the show, small town show put together by locals and not a huge over done production. This year’s event is going to be an evening show with a handful of flying displays. Here’s a link to the shows website…http://www.americasfreedomfest.org

My main reason why I’m going this show is the possibility for some amazing afternoon light. Flying doesn’t start until 7pm. The runway at Goshen Municipal Airport runs east/west and come late afternoon the light off to the east should be nice and only get better until sunset. Along with the crowd line was pretty close to the active runway, which make for a good opportunity for some panning shots. And in the lovely late afternoon light… Oh man!

Here’s a few of my pre-show thoughts. I have a shot of USAF heritage flight with F-22 and a P-51 that I shot at NAS Oceana back in 2008. It’s an OK image but it was shot is the bright mid-day light. The quality of light is boring and flat. As well as it’s a shot that many photographers shot during that show. 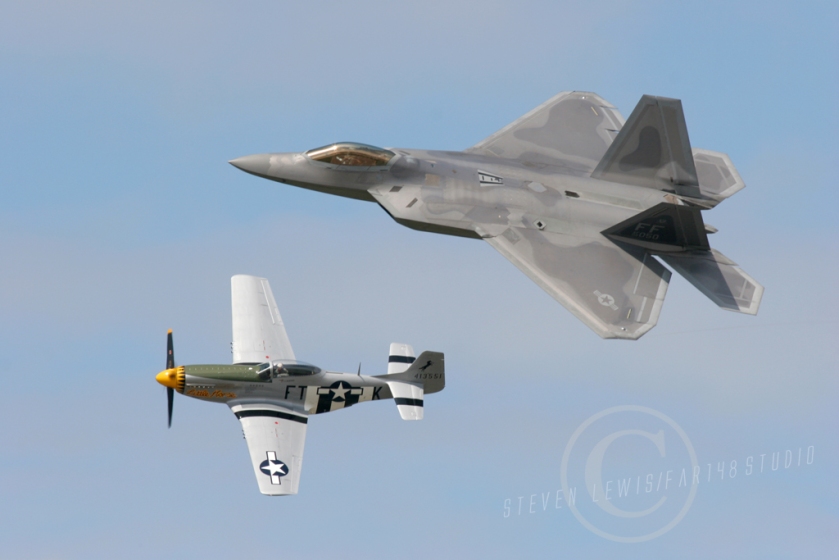 I’m hoping to replace that image with one with more dynamic lighting. The challenge is I’ll get only shot at trying to get the image I want. Again, it’s only a one day show, no practice or Sunday show. That means shooting higher in my comfort zone to have a higher “keeper” rate. So that means shooting in shutter propriety at 1/320th. Which is slow enough to show some prop blur on the P-51 but high enough to get a few keepers on each pass. I would like to shoot it at 1/100th or 1/125th but again it is a one day show. Getting a properly exposure image will be a little tricky. The paint on the F-22 like to shine a bright hot bronze color in late afternoon light. Which looks stunning but the camera tends to underexpose the Raptor, which isn’t a problem if I’m shooting the Raptor by itself. I can adjust the exposure in Lightroom no problem. 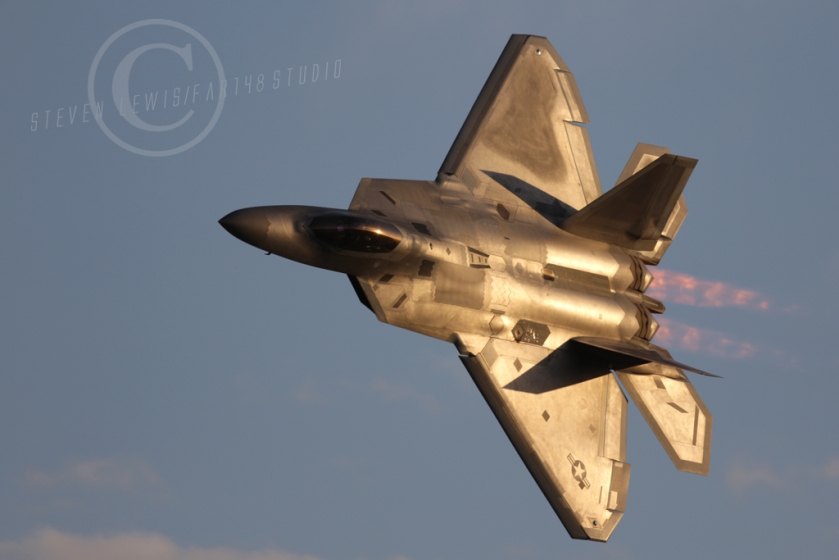 But during the heritage flight at Goshen with the P-51 Baby Duck, which has a highly polished metal finish, wonder how and if the light bouncing off it will mess with the exposure? Here’s an image I shot back in 2007 at Selfridge ANGB show. You can see the light bouncing off the P-51 Moonbeam McSwine’s and hitting the Strike Eagle fuselage. It’s cool that my camera’s sensor can pick that up but it makes a strange detail in the image. 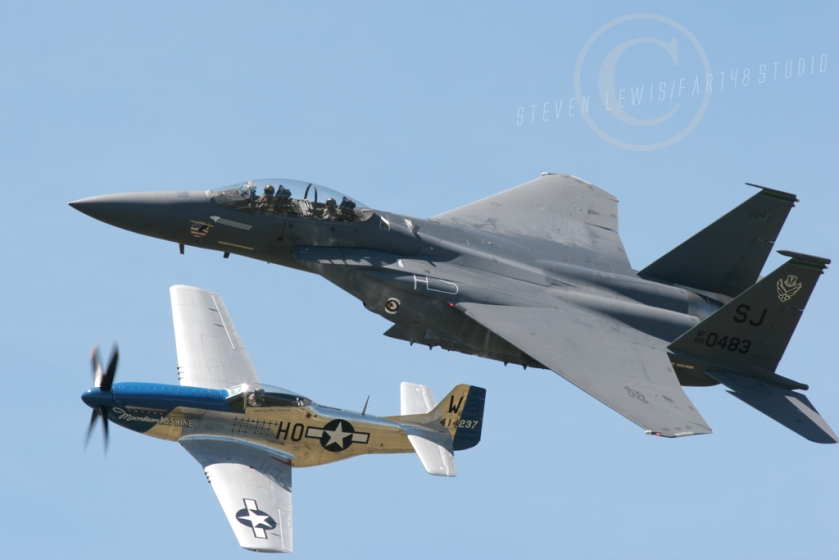 Also on the shows website, it shows Paul Keppeler’s CL-13B Sabre Mk 6(Canadair built F-86) will be attending the show. But I’m not sure if whoever put the website together just grabbed any picture of a F-86 or if that’s the one that will be there. There no mention of the owner and that’s has me worried about who’s Saber is going to be there. Warbird heritage foundation (WHF) owns and operates a beautiful F-86 out of Waukegan, Illinois, which would be short hop down to Goshen. I have no problems seeing it again but I have many great images of WHF Saber and not sure if I would be able to shoot a better one at Goshen. If so, great but would rather see Keppeler’s Saber. Will keep an eye out on their Facebook page and show website for any news or updates on attending aircraft. Here is a few of my favorite images of WHF F-86.

To add to the unknowns, not sure if the Saber would even be taking off and landing at Goshen. The runway there is only 6,050ft long and I’m unsure how much runway is required to operate a Saber. It could stage out of another larger airport and fly over for the show. Which is very possible. The F-22 along with the P-51 are flying down from Battle Creek, Michigan, doing the heritage flight and then heading back to Michigan.

I would like to get some static shots of the warbirds if possible in the afternoon light. Shooting good static images are always troublesome to shoot. Always fighting with background clutter around the aircraft. Everything from cones and ropes to porta johns to tents. Making it difficult to isolate the subject. There is also a good possibility that the aircraft will not be acceptable for shooting. Some show separates the flight aircraft on the “hot ramp” from the ones on static. Will know more as the show gets closer. If not, I’ll know when I get there and take a look around.

There is one more thing to consider, weather. Thunderstorms are notorious for popping up in the Midwest during the summer. There is a good chance the show could see some rain before, during or after the show. It is something you should always be prepared for. Seek shelter if a storm comes your way. Inside a cargo plane, a hanger or tent, something. Get you and your gear out of the rain. If there is a chance of rain at an event, I will bring a ziplock bag to put my gear in if the sky opens up. I know you’re thinking “A ziplock bag? To do what? Protect your cards and batteries?” Yes and my 500mm F/4.5 and whatever body I’m shooting with. Ziplock makes large bags for clothing which are perfect for protecting your gear from the elements. They come in many different sizes, you can get one that you can put you whole camera bag in or one just that would fit just your camera and lense. Priced around $10 to $15, which I don’t mind spending if it can save my gear. Amazon has them, search for “large ziplock bags”